The family of a man who died in a cruise ship related explosion is set to receive $242,000 in compensation, Newsweek is reporting.
The man died two years ago when he was working with gas cylinders which were used on the Emerald Princes cruise ship. He was killed when one of the cylinders suddenly exploded. The ship was docked at New Zealand at the time of incident. 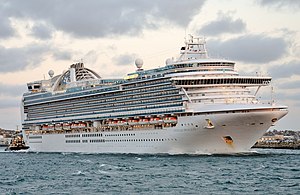 An investigation found that the cylinder had corroded to just 30 percent of its original thickness, which was the likely cause of the blast.
Newsweek reports that and investigation by New Zealand’s Transport Accident Investigation Commission (TAIC) found that the explosion could have been prevented, but that poor training and inspection standards contributed to the tragedy.
Princess was ordered to pay $NZ 360,000 to the victim’s family in restitution.