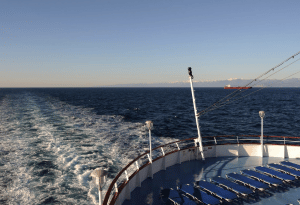 Woman Fell Overboard and Missing off of Norwegian Cruise Ship This just in from the Ft. Lauderdale Sun Sentinel The Coast Guard on Saturday continued to search for a woman who may have fallen off a Miami-bound cruise ship on Friday while off the coast of Cancun, Mexico. The Coast Guard identified the missing woman as Jennifer Seitz, 36. Her hometown was not available. She was traveling aboard the Norwegian Pearl with her husband, who reported her missing to cruise ship security about 3:50 a.m. Friday, according to the Coast Guard. Cruise staff alerted the Coast Guard after they did a search of the vessel and could not find the woman, Coast Guard officials said. The search for Seitz so far has covered 2,500 square miles of ocean, officials said. The Norwegian Pearl, operated by Norwegian Cruise Lines, is set to return to the Port of Miami this morning from a seven-day trip through the western Caribbean. _____________ My observations: We do not know all of the facts yet but some things on a cruise ship are for certain. First, why are there balconies on cruise ships? Second, if you are going to have balconies, wouldn’t you want to design and build them so it is extremely difficult to go overboard especially if going over the railing has such dire consequences such as death and where drinking heavily is the norm and promoted by the cruise lines? Third, a cruise ship is more like a huge party than a standard hotel or other commercial facility. If you have a party for 2,000 to 3,000 people, and you encourage them to drink, you should take security measures commenserate with that. That means sufficient security personnel, sufficient cameras, sufficient people monitoring the cameras, sufficient personnel present in the hallways and throughout the ship. Usually, the cruise lines do not have sufficient personnel. The cruise ticket (cruise passenger contract) provides that the passenger is required to bring suit against the cruise lines here in Miami, Florida. I have practiced martime law here in Miami for 28 years. We here at Hickey Law Firm, P.A. specialize in personal injury cases, in maritime cases against the cruise lines, and in cases of inadequate security. Why? Because we want to make the cruise lines safer, one case at a time. I know; I used to represent the cruise lines… for 17 years. Now I represent only the injured passenger or crewmember who has a claim against the cruise lines. We have cases of inadequate security or breach of the basic rules of security, and cases against Norwegian Cruise Lines (which actually owned by a company named NCL (BAHAMAS) LTD.) CALL ME, JOHN H. (JACK) HICKEY TODAY CALL US FOR A FREE CONSULTATION: 305.760.4492.