Dozens of Seattle, Washing area residents are protesting a proposed cruise terminal expansion to the city, citing cruise ships’ high levels of pollution and greenhouse gases as a primary concern. 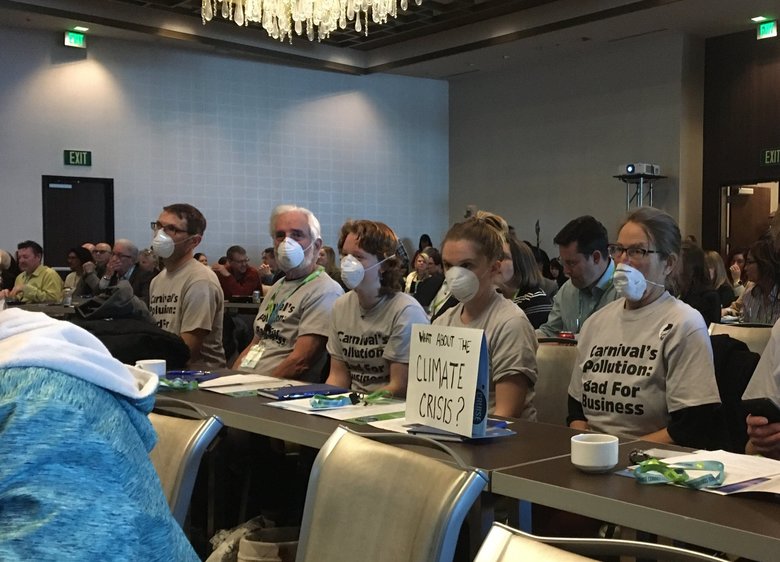 SeattleTimes.com reports that some climate activists consider the city’s deal to construct the terminal near Pioneer Square to be a “deal with the devil”. The activists appeared at a meeting during which cruise executives spoke about the plans. The report says that people affiliated with 350 Seattle and Stand.earth, both groups concentrated on environmental preservation, protested at the meeting. They reportedly stood up, put on ventilator masks and displayed t-shirts that they were wearing which said “Carnival’s Pollution: Bad for Business.”

The groups’ concerns are not unfounded. Carnival Cruise Line is bidding to build and manage the terminal, along with two other consortiums, reports the Seattle Times. Carnival is a criminally convicted environmental polluter. Two years ago the company agreed to pay a $40 million fine after it was caught polluting the world’s waters. Carnival was hit with another $20 million fine after authorities found that the company was violating its probation.

Cruise ships are NOT currently compatible with orcas. Or, for that matter, with life on Earth. If you really want to be green, it’s time to walk your talk. Or at least, not to torch your promises with bunker fuel. pic.twitter.com/JcOwgf6Rhy

Though cruise ships take a heavy toll on the environment, Seattle seems dedicated to moving forward with the expansion. Even Port Commissioner Fred Felleman, who many consider to be environmentally friendly, conceded that the Commission would do its best to best to limit pollution. This seemed to be a thinly veiled admission that there would be some trade-off of environmental impact for the profits the cruise companies are expected to bring to the area.

While about 10 people protested inside the meeting, another dozen or so protested outside, with some wearing attention-grabbing costumes (one person was dressed up as a polar bear.) But it seems that the protests will have to grow significantly in size if the activists are to have any hope of derailing the city’s “deal with the devil.”