Earlier this month an elderly cruise ship passenger went missing from the ship on which he was traveling. After several weeks missing, the man’s family continues to believe that he may still be alive and adrift at sea. 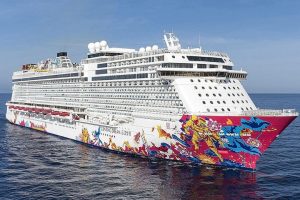 74-year-old Goh Hai Peng, a retired electrician, went missing under mysterious circumstances from the Genting Dream cruise ship on August 4, Newsweek reports. He was not reported missing until the ship returned to port in Singapore, and his belongings were still in his room when authorities searched it. Apparently, the last time he was seen on surveillance camera was on the first night of the cruise at approximately 7:00 p.m. as he entered his cabin.

The ship was on a 4-day itinerary, sailing around various Malaysian islands when Peng went missing. On the second day of the cruise, the ship’s surveillance cameras recorded a figure falling into the sea at approximately 3:00 p.m.

Perhaps due to the unusual circumstances surrounding Peng’s disappearance and the fact that neither he nor his body have been located, his family has been unable to find closure. “For all we know, our father could still be alive and adrift somewhere in the Malacca Strait, and it seems as if he had been left for dead,” Peng’s son said.

A spokesperson for Dream Cruises said that the company has searched the area where the figure was seen falling into the water, but have not located him.